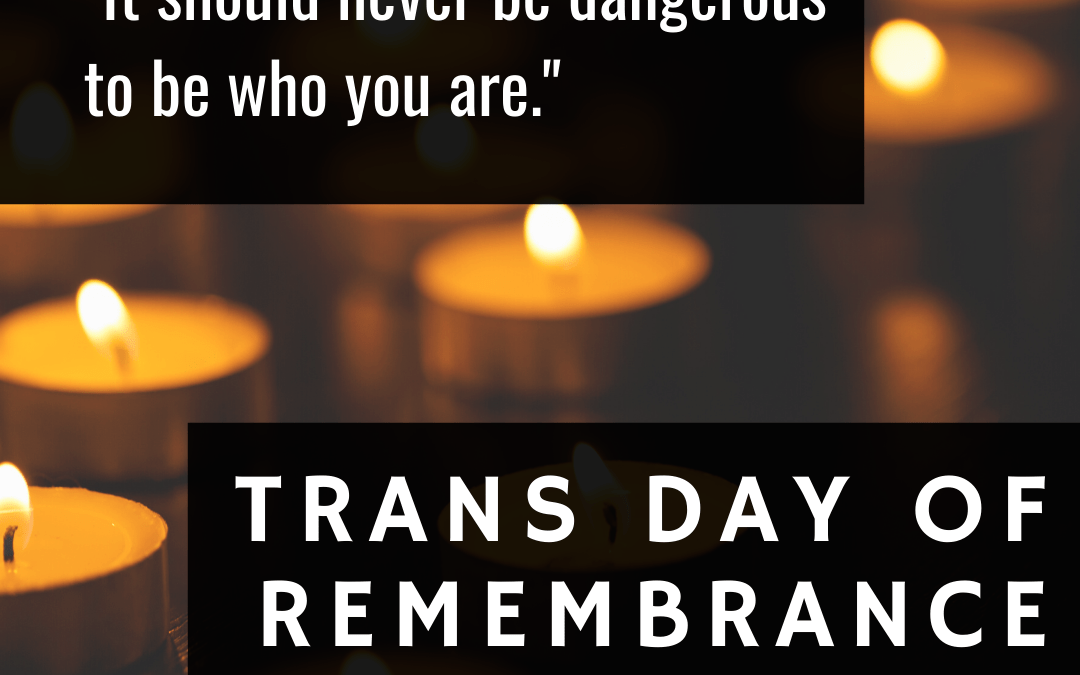 In 2018, there were at least 369 trans people murdered worldwide. While the number of murders of trans people in Canada is low year to year, trans Canadians are still at greater risk for discrimination and violence than their cisgender neighbors. In Canada, trans women are twice as likely to experience domestic violence. According to the Trans PULSE Survey, 98% of trans people have experienced transphobia. This is unacceptable. We demand that all levels of government, organizations, and people take immediate action to prevent the marginalization and murder of trans people.

Like the rest of the 2SLGBTQ+ community, trans people also experience high levels of rejection from their families, causing them to lose important community supports, which can have a negative impact on their physical and emotional wellbeing. The Trans PULSE Survey found that 77% of trans people have seriously considered suicide. Indigenous trans people, trans people of color, trans people with disabilities, and trans people with other intersecting identities are at greater risk of many forms of discrimination, exploitation, and violence.

West Central Women’s Resource Centre serves all women, which includes trans women. We provide housing, income, and employment resources, settlement support for newcomer trans people, and simply a safer place to exist. We are committed to both implementing the Calls for Justice from the National Inquiry into Missing and Murdered Indigenous Women and Girls (which includes all members of the 2SLGBTQ+ community) and to advocating for all levels of government to do so too.

However, there is still much work that needs to be done. There is a huge lack of research about (and by) trans people. This gap leads to an erasure of trans people, their needs, and their experiences, which in turn leads to a lack of awareness, services, and support. Important steps would include the creation of a 24-hour safe space for 2SLGBTQ+ people, full and free access to health care needs in accepting environments, and better education and implementation of services for 2SLGBTQ+ people at all government and community levels.

It should never be dangerous to be who you are. Trans people have the right to live and be honoured as valuable and loved members of society, which will only happen when we end the discrimination and marginalization they currently face. We must work for nothing less than to hear not one single name read out on future Trans Days of Remembrance.