At West Central Women’s Resource Centre, we work toward achieving our vision on multiple levels, which includes advocating for systems and policies that help empower women and families in our community. Below are some examples of the research and policy we are currently undertaking. 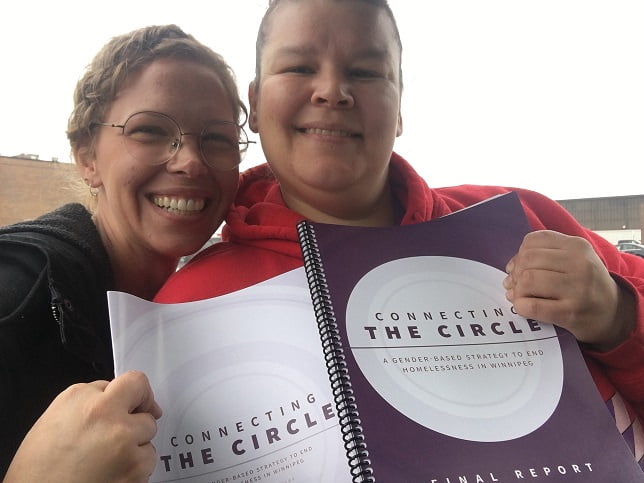 Connecting the Circle: A Gender-Based Strategy to End Homelessness in Winnipeg (2019)

West Central Women’s Resource Centre is leading the creation of Connecting the Circle: A Gender-Based Strategy to End Homelessness in Winnipeg to be implemented within Winnipeg’s 10 Year Plan to End Homelessness. Women, trans, two-spirit and gender non-conforming individuals experience unique paths to homelessness due to gender-based experiences in communities and social systems. The Strategy will include targets and timelines for closing gendered systemic gaps, including at minimum targeted recommendations to improved gender-based supports for those exiting Violence Against Women shelters and Correctional institutions.

The strategy is comprised of

We envision the Strategy implementation as community owned and will propose a body to promote its implementation to the City of Winnipeg and the systems which impact paths to homelessness.

We are grateful to Status of Women Canada for their financial support.

In partnership with 3 other community organizations, we have launched Project Manitouwabi, a pilot project working to address gaps incarcerated individuals face when trying to secure safe and affordable housing prior to release from custody. This ground-breaking initiative is administered by the Indigenous Women’s Healing Centre, the John Howard Society of Manitoba, and the Assembly of Manitoba Chiefs Eagle Urban Transition Centre, and West Central Women’s Resource Centre.

Project Manitouwabi was born from collaborations between the Re-Integration and Homeless Prevention Action Group as a response to components in the Plan to End Homelessness in Winnipeg. Funded by the Government of Canada’s Homelessness Partnering Strategy administered by the City of Winnipeg, Project Manitouwabi is intended to provide ongoing case management support services for up to one year after an individual’s release from custody.

The Project’s Housing Support Case Workers will work to prevent homelessness for those who are hardest to house when exiting a correctional facility. The Case Workers will also work on establishing a coordinated system to work with secondary agencies such as Employment and Income Assistance (EIA) and other community organizations to ensure participants have a secure income and supports in place prior to their release from custody.

Participants of the project will be supported for up to 1 year after their release through referrals to education programs, technical courses, health services and other support services as needed. The project will also work with Winnipeg Rental Network and landlords to build a sustainable support system.

Winnipeg Without Poverty: Calling on the City to Lead (2018)

Make Poverty History Manitoba launched its city poverty reduction plan Winnipeg Without Poverty: Calling on the City to Lead on May 2nd 2018. West Central Women’s Resource Centre’s Executive Director and Director of Housing were key in drafting and disseminating this important report which is endorsed by more than 90 organizations. It calls on Winnipeg’s Mayor to be a champion for poverty reduction and commit to leading the development of a comprehensive poverty reduction plan. Up to 107,000 Winnipeggers are living in poverty.

The community-based plan offers fifty recommendations that the City can implement as part of its own plan in policy areas such as housing, transportation, food security, policing and safety.

“Our Mayor has spoken out publicly in support of reconciliation and has embarked the City of Winnipeg upon a ‘Journey of Reconciliation’, said Lorie English, Executive Director of WCWRC and chair of Make Poverty History Manitoba’s city working group. “However, the Mayor has not yet fully acknowledged the link between reconciliation and poverty reduction.”

Indigenous people are over-represented in poverty-related statistics. The poverty rate among Indigenous Winnipeggers is 35% compared to 14% of non-Indigenous Winnipeggers. Reconciliation will require closing the gap in social and economic outcomes that exist between Indigenous and non-Indigenous people. The City can do its part by implementing a comprehensive poverty reduction plan with progress indicators that have targets and timelines as a key piece of its “Journey of Reconciliation.”

To date, the City’s poverty reduction initiatives have been implemented on an ad hoc basis, rather than through a strategic plan that guides priorities and planning. The report reviews poverty reduction efforts in other Canadian cities and concludes that Winnipeg is lagging far behind places like Calgary and Edmonton, which both have comprehensive plans. The report also concludes that the most successful municipal plans are those that are championed by the Mayor. Hence, today’s call to action.

As we head toward the next municipal election in October 2018, Make Poverty History Manitoba will lead Winnipeggers in a campaign calling on our next Mayor to be a champion for poverty reduction and commit to developing a comprehensive plan.

This community-based poverty reduction plan for Winnipeg consists of 50 policy recommendations that the City of Winnipeg can implement. The plan has been endorsed by more than 90 organizations from across the city.

Manitoba’s current minimum wage is a poverty-level wage. This is unacceptable. Women are disproportionately represented in low-wage jobs: fully 1/3 of women earn less than $15/hr, compared to only 22% of men. And the stats are worse for Indigenous and newcomer women. Those working full-time – or longer – to support their families should be able to live above the poverty line.

Learn more about 15 & Fairness Manitoba and what you can do at https://manitobafor15.ca.

Roots/Routes the Women's Empowerement and Leadership: A Promising Practices Manual (2016)

This is a study and Promising Practices Manual based on three women’s leadership and empowerment programs in
central and eastern Canada – the West Central Women’s Resource Centre WE-WIL program here in Winnipeg, he Working for Change, Women Speak Out Program in Toronto, Ontario, and the Empowerment Network POWER UP! program in Saint John, New Brunswick. Our task was to deliver our programs for several years, study the outcomes of the programs on the lives of marginalized women, strengthen our organizational and community partnerships and develop a manual of the most promising practices from our various programs and make it available to any organization interested in offering women’s leadership training.

We would like to thank the Status of Women Canada for suporting this project.